By Solomon Baksh (some text by Lauren Hill)

Rubbing my sleepy eyes, I peered through the porthole in my cabin, only to see a spectacular sunrise over Little Cayman. I grabbed my camera, and making a quick stop for a cup of freshly brewed coffee, headed to the top deck of the luxurious Cayman Aggressor IV to snap a few shots. The sea was perfectly flat with an intense blue hue. This was going to be a great week for diving.

Located south of Cuba, the Cayman Islands are outcrops of the submarine mountain range associated with the Cayman Ridge that forms the northern margin of the Cayman Trough. This Trough is around 150 miles wide and reaches depths in excess of 16,000 feet.

The steep drop-off of the Cayman Trough, creates some of the most dramatic wall dives in the Caribbean. The nutrient-rich upwellings bathe the reefs, producing impressive vivid sponges, lush reefs and profuse marine life.

Divers who visit, usually stay on just one island and rarely have time to explore the other islands since the only means of getting there is by flying.

The best way to dive all three islands in one week while enjoying all the amenities of a land-based resort, is on the Cayman Aggressor IV. The live-aboard lifestyle is simple—Eat, Dive, Sleep—well, sleeping is optional. Imagine waking up every morning with the ocean always in sight, a hot breakfast and another day of great diving.

It’s the nature of these trips that make them so attractive—plying the open ocean to different dive sites every day. Over the course of a week, the diver gets a variety of experiences, instead of being stuck in the heart of civilization, on land.

Wayne B. Brown, CEO of the Aggressor and Dancer Fleet, invited me to join him as he hosted Dive with the Owners and Critter Education week. 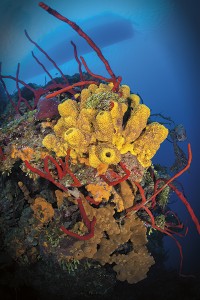 “Dive with the Owners week started when I bought the company in April 2007, as a way for me to meet as many of our guests as possible,” Wayne explained. “I don’t just get to meet them but hear how we can make Aggressor Fleet even better. Critter Education week started in 2013. Guests learn about critters, sharks, turtles and other animal life behavior during nightly presentations.”

Wayne was my buddy for the week since we both shared a passion for underwater photography. He is an exceptional photographer and has a keen eye for macro subjects.

Even though he has been around the globe several times diving at many exotic destinations, I asked Wayne why he liked the Cayman Islands.

“There is no where else in the world that has the Cayman-blue water! Every time I dive there, I go to the edge of the wall and I am just amazed at the water’s color. With minimal water temperature changes throughout the year and the sheer walls with the healthy reefs and sea life, there is always something new to see or experience year after year,” he replied.

Curaçao is the largest of the islands (171 square miles) that now make up the Dutch Caribbean, which includes the other autonomous countries, as well as the BES islands of Bonaire, St. Eustatius and Saba.

Go West Diving, a PADI 5-Star Instructor Development Resort, was the obvious choice of dive center that could help me explore the reefs in Westpunt in the limited time I had.

My week of diving was aboard the Palavos, a large and comfortable 38-foot Convertible Hatteras captained by the effervescent Julius Francisco. In addition, there were two 36-foot Delta boats. 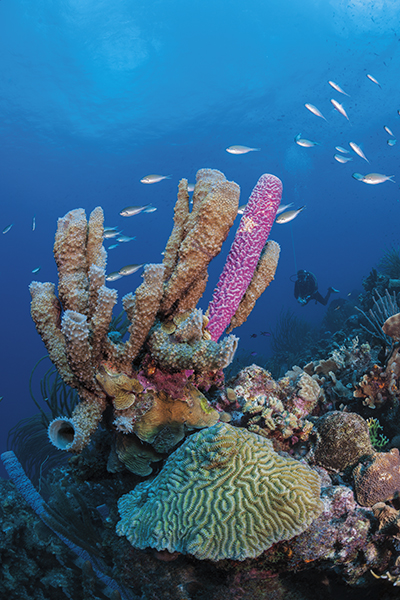 Scooter was one of the most dynamic dive sites that I had visited, with its gently sloping reef, filled with a multitude of reef fish. Large colonies of towering purple stovepipe sponges were interspersed throughout the reef, along with wide, brightly colored elephant ear sponges. While this could be considered a moderate drift dive, it was a struggle against the current with my large camera set-up, trying to photography every inch of this spectacular reef.

Almost every diver I met on the boat was a repeat customer, like James Rosser from Arizona. “This is my eleventh trip to Curacao. I first came to the island with some professor friends of mine who were studying Papiamentu,” James explained. “After the students returned home, my job was to entertain them and diving was one aspect. Surfacing after my first dive, I knew I would be back but did not envisage it being every year for the last 11 years. No matter how many times I have been on the reefs, it’s different each dive.”

Located just about 2 minutes northwest of the dive shop, between West Point and North Point, Watamula derives its name from the Dutch word, Watermollen (Water Mill) because of how the currents flow in the area.

“We really never understand what the currents will be doing at Watamula until we jump into the water to check,” explained Bryan Horne. “Sometimes they are flowing north to south, other times south to north, or even in a circle! So, Go West Diving set up two moorings to accommodate that. If the current is bad at one mooring, we just move to the other one.”

Unlike the other dive sites, there were no sandy patches at Watamula. It was just one continuous reef with an impressive hard-coral formation, covered mainly by a variety of sea rods, sea fans and sea plumes. Huge colonies of towering pillar corals were scattered everywhere