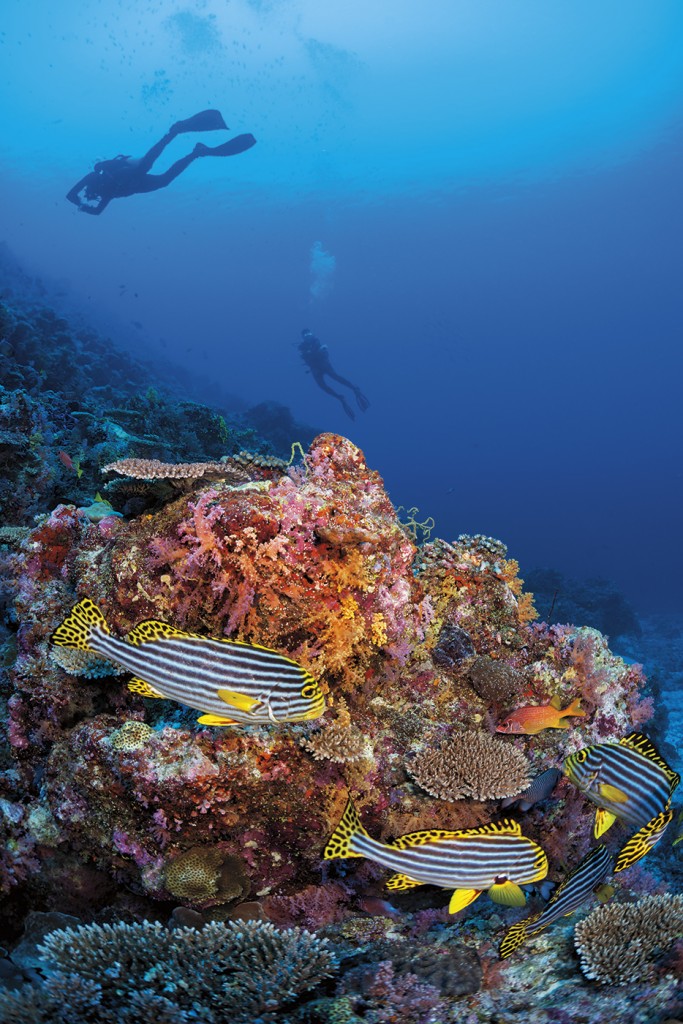 Maldives as a country, is about 99 percent water and less then 1 percent land—that is lot of ocean to explore! Ring-shaped reef structures from the atolls, provide a natural barrier against wind and wave action during the monsoon seasons. Over millions of years, small fringing reefs began to develop from subsided volcanoes. Over a period of time, these further developed into larger barrier reefs. When the volcanoes eventually subsided completely, these rings left a lagoon in the middle.

This was the furthest east that I have ever been diving and I was excited. National Geographic was my favorite TV program, growing up as a budding scuba diver and so too were documentaries about the explorations of Jacques Yves Cousteau. They both covered the Maldives extensively and I have always wanted to go there.

I got this opportunity when Wayne B. Brown, CEO of Aggressor and Dancer Fleet, asked me to join him for Meet-the-Owners-Week, aboard the Maldives Aggressor. With many months to prepare for this trip mentally, going on such a transcontinental journey would mean being airborne for 20 hours, plus a layover in the airport for another 10 hours covering a distance of 9,730 miles, from Miami to Malé, in total. “Is it worth it?” Absolutely!!

The Maldives Aggressor is a 115-foot long, steel hull, twin-mast, four-sail luxury yacht that was put into service in 2009 as part of the Aggressor fleet. It can achieve a top speed of 13 knots and is extremely stable. Even in rough water, there is very little rocking. It can accommodate 20 passengers and 10 crewmembers. The staterooms are spacious with individual climate control, large bath and TV. The bunk-style beds are wide and very comfortable. With all the diving, there was little time to sleep.

All diving was done from dhonis. These spacious diving tenders are locally made and have a separate crew of three, including a captain. All diving gear is kept on board and tanks filled in place. Since all of the dives in Maldives are done as drift, the dhoni follows the dives and is always there when divers surface. A surface marker buoy is highly recommended because of the heavy boat traffic.

There are over 85 live-aboard yachts in Maldives and with that, hundreds of divers. It is normal during a dive, to encounter other dive groups, though on this trip it only happened twice on a very popular dive site on the North Malé Atoll.

Switching to Manual, Do I Really Have To?

Often, one of the early conversations we have with our underwater photographers, is about their camera settings. A lot has been written on the subject, since popular techniques and effects are created by manipulating the relationship of your shutter and aperture (and to be accurate, your ISO).

For many students, an early realization is that manual exposure or choosing to input your camera settings manually, yields a more satisfying result to the Program modes built into the camera. Lots of accomplished photographers will routinely use Program, Auto, Aperture (AV) or Shutter priority (TV) modes, when they are shooting above water, only to switch over to manual when the camera goes into the housing.

Why is this? The diving photographer of all people, should prefer the advantages of automatic exposures; time and air are limited, subjects often pass by too quickly to capture anything but a single frame, and changing settings takes valuable time. Diving to capture your images is the opposite of studio work—you have no time and no control!

The answers to this question, like everything in photography, are full of exceptions and contradictions, and influenced by personal preference. Often, you will hear the word “creativity” coming up in this discussion. Correctly so, but this is not to say any one method is right or any method wrong. It is your art to create in the way that pleases you.

Manual camera settings will allow total creative control of the lighting in your scene. Some of the most beautiful images we see are “technically speaking,” underexposed, and sometimes even overexposed. The camera’s light meter would not necessarily expose the image in the same way. But they look great that way!

You may prefer a scene, dark and moody, with a splash of color or a sun ball occupying a large part of your frame, to accentuate the rays produced by the water. These are the artistic visions you are attempting to create with the choices you make in your settings. Manually setting your camera, provides these choices. 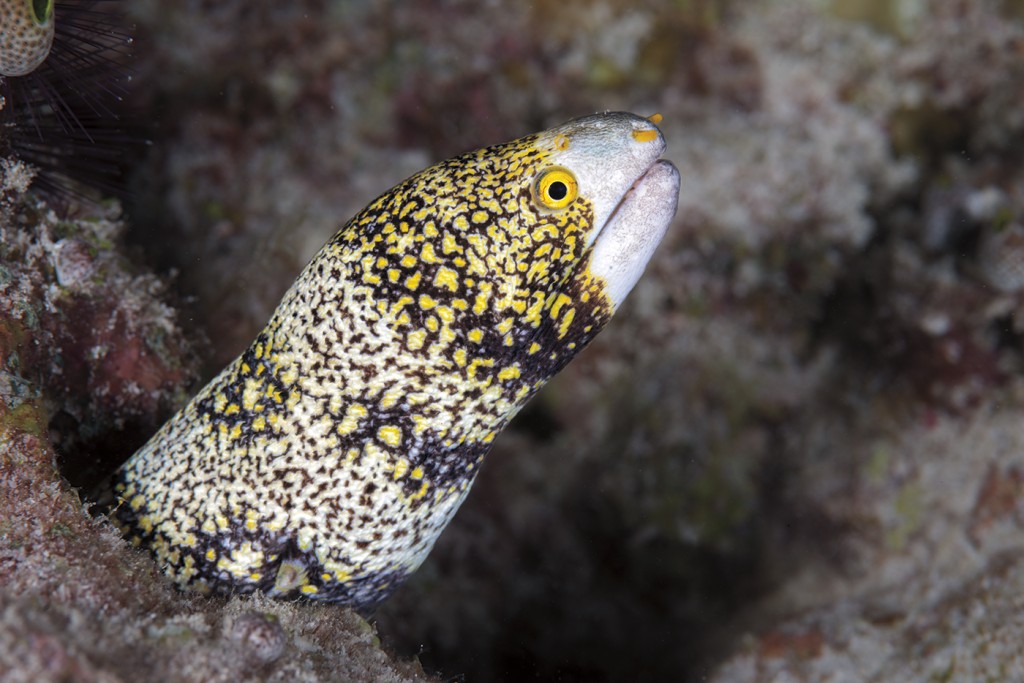 They look like snakes, hide in dark recesses and even slither along the reef like snakes. You see something move in crevice and go closer to take a look…only to see a gaping jaw, with pointed teeth greeting you. No need to panic; it’s just a case of mistaken identity. This is no snake, only the deceptive appearance of a harmless fish — an eel.

As ambush predators, morays rely on stealth and large, piercing teeth as their main tools for hunting. Due to their cramped dwellings in crevices and small recesses, morays have had to adapt to their feeding habits. Unlike most fish, which capture prey by creating a suction force by quickly opening their mouths (and expanding the neck), morays have evolved their own special feeding mechanism.

This adaptation is in the form of a unique pair of pharyngeal jaws, further inside, which sit on the throat. It extends forward to assist in gulping prey that is already grasped in the mouth and aids in swallowing by swiftly throwing the food into the stomach. Morays then, do not chew but deliver a double bite and gulp their prey quickly and effectively.