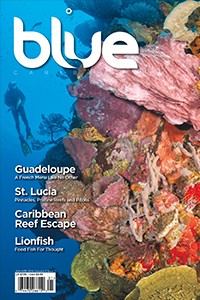 This was one of the toughest decisions I had to make. Everyone had already placed orders for dinner but I was having difficult time choosing an entrée. As I sat in the cozy restaurant in Marie-Galante reading the French menu, I just could not make up my mind. After a drink of ti punch, I decided on poisson. You just cannot go wrong with fish.

In a regular non-French restaurant I would have probably been the first person to order. The problem here was not the fact that everything was written in French but the description of each item sounded so delectable. Tourism official Willy Lauzeat, who accompanied me to Marie-Galante, was my translator. As he read through the list in the menu for me, each item sounded better than the last.

The French really have a high standard in everything that they produce but especially so when it comes to all things gastronomique. I had been to Guadeloupe and Les Saintes a year ago and thoroughly enjoyed the polite people, the culture, the food and more so, the diving. 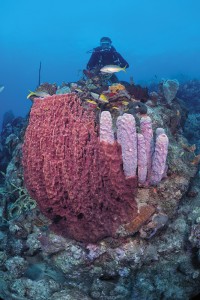 I spent most of my time diving around Pigeon Island and Cousteau Marine Reserve and made a memorable dive trip to Sec Pâté in Les Saintes. This time, my travels would take me to Bouillante in Basse-Terre and Marie-Galante, south of Grande-Terre.

This was going to be a short trip so I had to choose carefully the dive sites that I wanted to do. Each dive operator had well over fifteen sites and I could only afford to do three or four dives with each one.

I returned to Pigeon Island just because the diving in the Cousteau Reserve is spectacular. This time I dived with Centre de Plongée des Îlets and Eric Derguy had been assigned as my divemaster. While his English was barely understandable, it was way better than my French and I understood everything he said, once he spoke slowly.

Eric brought me a dive map. “These are our dive sites. Where would you like to go?” he asked me. I took a moment to scrutinize the very detailed map.

“Well, I have done several of these dive sites,” pointing out four sites that I have been to. “What would you recommend?”

“Those are the popular ones…very nice sites you have been to. We have some others that are just as good. Probably better,” he replied.

I noticed that there were several wrecks on the map. Last year I dived on the wreck of the Franjack. This 150-foot freighter was built in a Swedish naval yard in 1958 and was purposely sunk near the coast of Pointe de Malendure in 1996. It rested on its port side until Tropical Storm Bertha repositioned it flat on its keel. Heavily covered in colorful sponges, this wreck attracts huge amounts of marine life and a night dive would reveal the dozens of turtles that come here to rest.

“Any chance we can dive one of those wrecks?” I asked Eric convincingly. 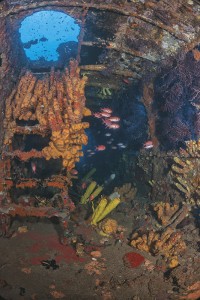 As you drift along Coral Gardens reef, you watch the corals, sponges and huge schools of fish, dance together
in a beautiful display of colors that only nature can pull off. The sheer variety of critters and colors makes this human-sized aquarium pure diving fun.” This is how Nadia Cumberland, a 25-year-old engineer from Alberta, Canada, described the diving she had just done at Coral Gardens.

This was my second trip to Saint Lucia in two years. The first time I was here, the sea conditions were not that favorable and visibility varied due to heavy rainfall. I was hoping that this time would be better.

I was once again staying at Anse Chastanet Resort and was diving with their on-site dive shop, Scuba Saint Lucia. After arriving at the resort early in the morning, I hurriedly unpacked my dive gear and headed towards the dive shop that was less than a couple minutes from my room.

Unfortunately, I missed the boat by just 5 minutes. “You would not have been able to get onto the boat anyway until you did your checkout dive,” David, the young divemaster, reminded me. Scuba Saint Lucia insists that every diver complete a checkout dive prior to getting onto the boat. No exceptions. Either a divemaster or an instructor always accompanies divers. 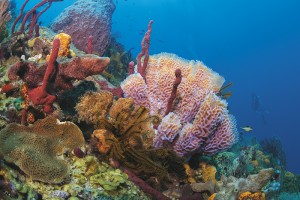 David asked if I wanted to join him and a group of four other divers who were about to do a shore dive on the Anse Chastanet house reef. I quickly suited up and waded into the warm, blue Caribbean Sea. The sea was perfectly flat and the visibility was exceptional. The only regret I had, was not bringing my camera, missing the opportunity to take photos of large schools of snappers, groupers, barracudas and several small hawksbill turtles.

Toward the end of the dive, David took me up in the shallow, at around 8 feet and pointed out a rather large and vivid yellow frogfish. “This frogfish has been hanging around here for the last month and usually moves among the tube sponges. We have been able to find it on every dive,” he explained. A couple days later, I was back on the reef with my camera and macro lens. Sure enough, there was the frogfish, exactly where I had seen it a few days before.

Having completed my checkout dive, I decided to have lunch at the nearby restaurant. Anse Chastanet boasts three restaurants that serve an array of international cuisine. The beach bar was popular with the divers since they can sit with their wet suit on and enjoy a meal.