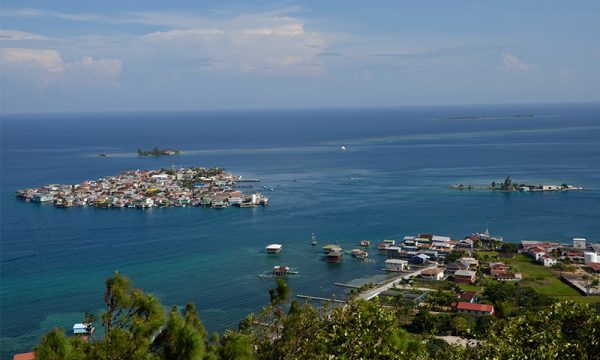 Guanaja’s center of activity is on The Cay, which is a compact area, fully surrounded by water, comprising two smaller cays—Hog Cay and Sheen Cay. They have become indistinguishable because so much construction has occurred over the years, to form one huge community where thousands of people now reside, out at sea. It is a busy little place, with narrow concrete streets mainly for pedestrian traffic, as there are no automobiles. There is a network of canals for boats as well as sewerage and even submarine cables for power and fuel supply, running from the island.

The best way to view The Cay and surrounding smaller cays off Guanaja, is to take a short but steep hike up Stanley’s Peak. Given the scorching daytime temperatures, it is best to go either early on a morning or late afternoon—I chose the latter. The water-based communities are conspicuous and reflect mainly older housing. It was a short boat ride from my base at Dunbar Rock to Pelican Reef, where we docked at a pier and proceeded on foot, through the hillside village of Vista Hermosa. You need a good pair of strong legs and a fit heart for this initial climb—even so, expect some lactic acid buildup and breathlessness because of the steep pathway, that so many locals are accustomed to.