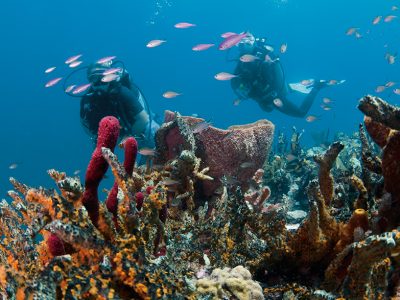 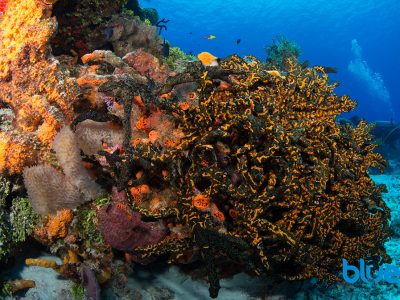 Sponges are the simplest of multicellular animals, with no true tissue layers or organs, though their cells are able to perform specialized functions. They come in a variety of shapes (ropes, balls, barrels, encrusting, vases etc.), colors and sizes. The Green Finger Sponge (Iotrochota birotula) is a type of rope sponge with color variations of light green to dark purple, and almost black.

Zoanthids are also tiny animals and are in the same phylum (Cnidaria) and class (Anthozoa), as corals, anemones and jellyfish. They can be easily mistaken for anemones but they are much smaller, usually existing in colonies, plus the arrangement of the tentacles around the oral disc, is also different, compared to anemones. Some live in association or symbiosis with sponges.

The Green Finger Sponge usually associates itself with the Golden Zoanthid (Parazoanthus swiftii). At one time zoanthids were thought to be parasites on sponges, as they embed themselves into their structure, in a meandering pattern. Instead, they form a healthy alliance with sponges and protect them from being eaten by predators. At first glance, classifying a sponge with a symbiotic zoanthid, could be puzzling but look closely and you’ll observe a fascinating interaction between two marine animals.